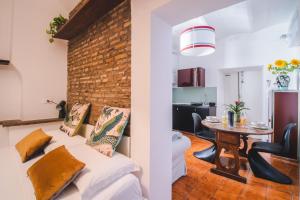 La Vetrina, the renaissance charme of Piazza Navona is set in the Navona district of Rome, 300 metres from Piazza Navona, 400 metres from Castel Sant'Angelo and 600 metres from Campo de' Fiori. Housed in a building dating from 15th century, this apartment is 1.1 km from Via Condotti and 1.1 km from The Vatican. The air-conditioned apartment consists of 1 bedroom, a living room, a fully equipped kitchenette with a microwave and a kettle, and 1 bathroom with a bidet and a shower. Towels and bed linen are featured in the apartment. Popular points of interest near the apartment include Pantheon, Largo di Torre Argentina and St Peter's Square. The nearest airport is Rome Ciampino Airport, 15 km from La Vetrina, the renaissance charme. 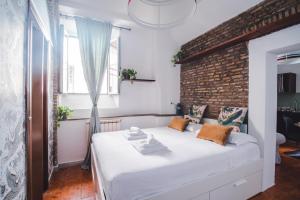 Important information
This property will not accommodate hen, stag or similar parties. A surcharge of EUR 30 applies for arrivals after 20:30.